The Association of Wood Exporting Industries of the State of Pará (Aimex) and the Brazilian Association of Forestry Concession Companies (Confloresta) would like to publicly clarify the facts surrounding Operation Akuanduba:

The entities declare that they have always acted in the defense of the interests of their associates and the forestry sector in a firm but absolutely honest, legitimate and democratic manner, participating in countless discussions in the most diverse political and institutional spheres, with federal and state governments, parliament, research institutions, third parties, councils, forums and private initiative.

The products exported, and which are the target of the investigation cannot, under any circumstances, be labeled as illegal or contraband. The entire process of licensing the cargos was duly authorized by the competent environmental agencies and the products declared in the official forest control systems, both state and federal, exported through customs ports, with customs clearance at the Federal Revenue Service.

The entire origin and traceability of these products is registered in the official systems and can be evaluated by the investigative bodies, in order to prove the legality of the exported wood.

The issue that gave rise to the export authorization controversy arose at the end of 2019, when some companies were taken by surprise as to whether or not an additional authorization was in force, as provided for in IBAMA Normative Instruction No. 15, in 2011 .

This authorization, initially made in a physical way and later directed to an electronic platform that had never been implemented, was for a long period of time, not issued by IBAMA / PA for conventional cargoes, that is, those whose forest species which are not included in the CITES list nor products mentioned in art. 5º of the referred IN (logs, sawn wood over 250 mm, charcoal, industrial wood processing residues and firewood of native species).

This is because, with the advent of Law 12.651 / 2012 (Forest Code) and IN IBAMA 21/2014, which created SINAFLOR – the National System for the Control of the Origin of Forest Products, the entire export process started to be regulated via the so-called DOF Export, which operates electronically and is integrated with the state (SISFLORA) and fiscal (SISCOMEX) systems.

The new regulation of IBAMA’s IN 21/2014 and electronic licensing systems made no mention of the former IN 15/2011 authorization.

IBAMA-PA itself no longer issued the document, although it was still being communicated by the export companies and, according to their methodology and capacity, cargo was inspected and released in customs ports.

It was obviously an obsolete control instrument that had been replaced by a digital control. In essence, it was as if a citizen was obliged to declare income tax in digital format, but he also had to keep the physical format.

Therefore, when doubt arose about the validity of the authorization provided for in IN 15/2011, the entities petitioned IBAMA to clarify and resolve the situation, as companies could not be penalized for the lack of clarity in the rules and regulations. procedures adopted by the regulatory agency.

The demand was duly filed, generating an administrative process that was instructed with technical notes from IBAMA and culminating in the President’s Order that sought to interpret the applicable rules, in the light of the instruments and policies adopted by IBAMA as of 2011.

All meetings with the technical staff of IBAMA and its President were at a high level. The claims and arguments of the entities were exposed with absolute transparency, based on the current environmental legislation and with the legitimate request for the agency to solve a problem that was causing legal uncertainty and that could harm the forest production in Pará, generating incalculable economic losses and serious social consequences.

Re-iterating: there was never any deal that was not absolutely honest and legitimate in the discussion of this and any other matter with IBAMA. All of its servants, at all levels, have always treated us with attention, respect and with a democratic spirit. And the same goes for their superiors.

Forestry entities and companies need IBAMA and a strong environmental control. They do not want to weaken the rules. They understand that this is good for Brazil, for companies, for markets, for society and for the environment. We are not environmental outcasts and we do not play against the public interest.
But they also want, like any company and citizen, efficient public bodies and clear and stable rules, which guarantee legal certainty in their activities and a safe environment for their business.

These are the true facts and clarifications that we wish to provide to Brazilian society and the entire institutional and employee network that involves the forestry sector.
We have confidence in the Justice System and the conviction that the investigations will confirm this reality. We remain at the disposal of justice and the authorities for any and all necessary clarifications. 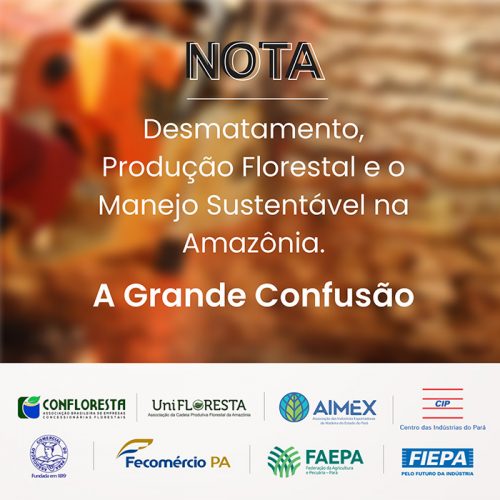